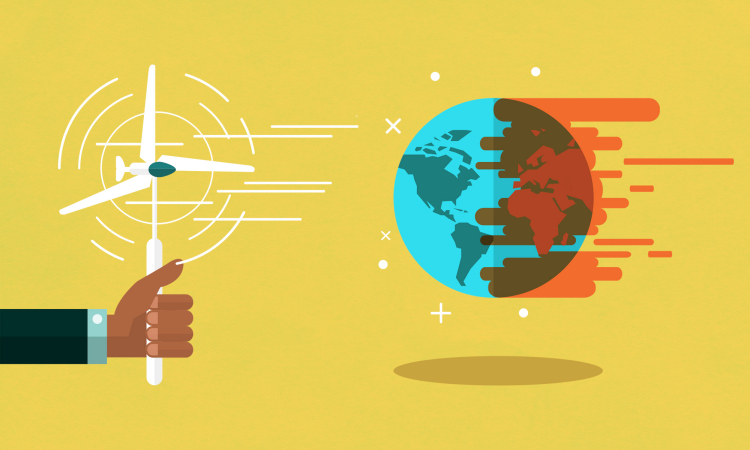 The Climate Justice movement is calling for tremendous change between now and 2050 – a 35-year window of opportunity to decarbonize our economies. We understand both the gravity and enormity of the transition for which we advocate. This transition will work to fundamentally change many of the social and economic systems that we belong to, today – and we wouldn’t have it any other way.

Two years ago, I had the opportunity to attend a panel discussion that featured incredible work within the evolving definition of what a Just Transition can look like.

During the Panel, they outlined justice-based energy systems that are: Decarbonized, Decentralized, Diversifiedand Democratized. Here on Turtle Island, and in all colonized lands, many of us also feel it is crucial to include Decolonization in this framework.

False Solutions and Bullshit DetectorsHere in Canada, we have no shortage of False Solutions to exemplify some dangerous wrong turns on the path to a Just Transition. From Saskatchewan’s unimpressive $1.4B Carbon Capture and Storage facility, to the ridiculous prospect of “Green Fracking” in Nova Scotia. To top it off,  the leading wind energy proponents in Canada include Enbridge and Suncor. Yup, that Enbridge and that Suncor.

For me, If the largest proponents of our shift to renewable energies are the very same corporations who also happen to be the key proponents of continued expansion of the tar sands and exploitation of Indigenous rights – then we have a problem.

Within this, Ontario has installed 4,300 MW of wind energy, and has successfully become among the first jurisdictions in North America to fully phase out coal as a generation source – two tremendous achievements.

However, the haste of this shift has come at a cost. Ontario’s wind energy regime is now among the clearest examples of how not to develop renewable energy in a way that respects the rights of indigenous peoples, community autonomy and a justice-based transition. Ontario is now home to countless anti-wind energy organizations, entire municipalities passing resolutions to disallow wind development, and numerous First Nations-led blockades of wind energy project construction.

Technology plays an important role in this transition. However, the roles to be played by community, justice, reconciliation and relationships are infinitely more important at this stage.

It doesn’t have to be all bad!

I’ve had the privilege of spending three years developing community-owned wind energy projects in unceded Mi’kmaq territory, here in Nova Scotia. The ‘Community Feed-in-Tariff’ program prioritized renewable energy projects with ownership from First Nations, universities, municipalities and co-ops. The projects developed under this program played a key role in moving the province’s electricity sources away from nearly 90% reliance on imported fossil fuels. It was not perfect, but it was a damn good first step. Unfortunately, this program barely lasted an election cycle. As soon as a new government was elected, the program was cut.

The death of this program, for me, highlights how critical it is that we celebrate the steps we make toward a just transition, integrate a justice lense into our communities’ economic development, and fight for continued action.

The struggle to build and re-build our economies, energy systems and societies will be an arduous one. We must support one another in this.

Indeed, we have very, very little time left. We have burned away the luxuries of half-measures and false solutions. The time for concrete commitments was yesterday. The time for meaningful, just, transformative change is right now – but let us not fall into the traps that haste sets for us. We need to transform our energy systems in a real hurry, but it would be a tragedy in its own if we allowed the coal plants, pipelines and tankers to be replaced with ‘solutions’ that were driven by the same tenets of capitalism, colonialism and extractivism that got us here.

For these reasons, the Canadian Youth Delegation to COP21 are calling upon the Canadian Government for strong, definitive action, as outlined below in one of two of our key pillars that will help guide our work at COP21;

The Canadian Youth Delegation is calling for a rapid, justice-based transition to a fossil-free economy. Canada must set ambitious near-term targets for 2020, 2025, and 2030 and completely phase out carbon emissions by 2050. This transition must begin by ending subsidies and ongoing structural supports for the fossil fuel industry, in addition to ending the growth of carbon-intensive industries such as the tar sands.

We call for a rejection of false, unjust solutions to the climate crisis, including corporate schemes such as Carbon Capture and Storage, the support of natural gas as a ‘bridge’ fuel, and low-carbon energy projects that violate Indigenous rights and title.

We call for a national climate and energy policy that generates green jobs with fair wages for workers, and that supports the growth of Indigenous-led and community-based renewable energy projects.

Acknowledging Canada’s disproportionate historic and ongoing contribution to the climate crisis, we call upon the government to commit to pay its fair share of climate finance to impacted communities. This includes funding for impacted countries to transition to clean energy and implement adaptation measures, as well as compensation for loss and damage.

Furthermore, we call upon Canada to recognize that its responsibility for climate action includes responding to the ongoing refugee crisis which has been perpetuated by climate crisis. In doing so, the government must exceed its 2015 goal of resettling 25,000 refugees in 2016, and make an ongoing commitment to refugee justice by creating a strong social net to support all migrants.

On an international level, we advocate for a fair, ambitious, and binding international agreement that keeps warming below 2°C — one which honours the demands of the most impacted countries, rather than the most wealthy ones.  We recognize the 2°C threshold as an absolute maximum, while calling for real targets that keep warming below 1.5°C by 2100, in line with demands from Small Island Developing States and Least Developed Countries.